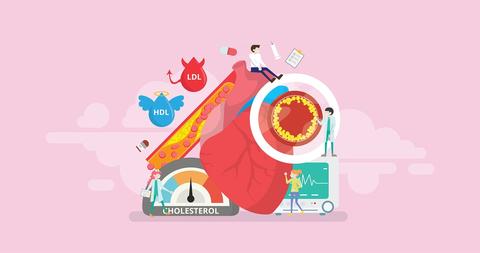 If you’re one of the 102 million Americans diagnosed with high cholesterol, it’s likely that your physician has spoken to you about managing your LDL (low-density lipoprotein), the “bad cholesterol” that can lead to buildup in your arteries. As a result, you may have been less concerned about your HDL (high-density lipoprotein), which acts as a cleanser of sorts and removes cholesterol from the arteries, delivering it to the liver for elimination from the body.

It seems simple, right? The directive to lower your cholesterol means lowering the overall number.

Not so fast. There are a number of reasons why cholesterol treatment is ‘one size fits all.’ The focus, says Jinal Gangar, MD, MPH at Steward Medical Group’s Easton Hospital, should primarily be on reducing cardiovascular mortality.

“There is more consistency, more clinical trials, and more focus on the LDL. Once we lower the LDL, you have a mortality benefit. Anything in medicine that has a mortality benefit is your top priority,” says Dr. Gangar. “HDL is an independent risk factor for cardiovascular mortality. So when someone has a very low amount of good cholesterol in the setting of elevated bad cholesterol, the risk of dying from a cardiovascular disease is substantially high.”

Let’s back up to the basics: Blood cholesterol can be used to estimate an individual’s risk for heart disease, which involves looking at the ratio of total cholesterol level to the level of HDL. Total cholesterol includes not only LDL and HDL levels, but also accounts for levels of triglycerides and VLDL (Very Low Density Lipoprotein) – calories consumed that are burned off and are instead converted into fat.

An easy way to determine your heart health risk is to use the ASCVD (Atherosclerotic Cardiovascular Disease) Risk Calculator, which was developed as a companion tool to the 2013 American College of Cardiology/American Heart Association Guideline on the Assessment of Cardiovascular Risk. The calculator includes age, sex, race, total cholesterol, HDL cholesterol, systolic blood pressure, blood pressure lowering medication use, diabetes status, and smoking status.

“Dyslipidemia is not just based on any single number like LDL cholesterol alone, but that’s all you hear about – ‘My LDL was this high,’ or, ‘My triglyceride was this high.’ Triglyceride reduction has not shown any independent benefit to cardiovascular mortality,” Dr. Gangar explains.

Statins: The cholesterol-lowering drugs
Of the 102 million Americans with high cholesterol, more than 73 million of them meet the guidelines that suggest their cholesterol could potentially be lowered by taking a statin. Statins are drugs that work by primarily lowering bad cholesterol as well as moderately increasing HDL , thus reducing vascular events – and are part of the complexities of medicine where there is a bottomless pit of research and refined clinical questions put into them.

As with any prescription, taking a statin as a primary prevention should be a collaborative, personalized decision between doctor and patient, following a thorough evaluation of the individual’s medical condition and personal concerns. More often than not, however, statins are prescribed as a form of prevention and because that individual is a cardiac risk – not because they have already experienced a heart-related event. Statin therapy can be high, moderate, or low intensity.

“When you put someone on a moderate-intensity statin, like pravastatin, lovastatin or low-dose rosuvastatin and atorvastatin, they can decrease cholesterol levels by up to 45 percent, and even more when used in conjunction with lifestyle changes. They can also decrease cardiovascular mortality when the 10 year calculated ASCVD risk is more than 10% at baseline,” Dr. Gangar says, “if we can bring a person’s low-density lipoprotein levels to less than 100.”

So, what are the LDL and HDL cholesterol ranges and differences?

Less than 100 mg/dL (milligrams per deciliter) is the optimal LDL measurement, while 100-129 mg/dL is near optimal or above optimal. Anything over 130 is considered high, while 190 and above is considered very high.

For HDL, less than 40 mg/dL is a major risk factor for heart disease. 40-59 mg/dL is better, while 60 mg/dL is considered protective against heart disease, and is subject to gender differences. An HDL of less than 50 for females and less than 40 for males increases cardiovascular risk.

“When do we start treating someone with elevated cholesterol?” asks Dr. Gangar. “Let’s say someone’s LDL is 190. I would definitely put them on a moderate intensity statin, irrespective of if their HDL is at 60. Or, say a patient has an LDL of 170, and this person also has a low HDL. I’m more inclined to put them on a statin than to wait and watch. Individualized calculations of ASCVD risk is an optimal approach for patients between 40-70 years of age.”

Statins can also increase mortality benefits in a way that lifestyle changes – such as diet and exercise –clearly cannot, as seen in recent clinical trials. Watching a patient’s progress after lifestyle modifications sometimes helps decide the need to be on a cholesterol modifying agent like statin.

“If someone has high LDL and low HDL, they will definitely benefit by optimizing their risk by following diet, exercise and other lifestyle changes” Dr. Gangar says. “I would try three to six months of lifestyle changes, and if the LDL stays persistently elevated, I would put them on a statin.”

With the ASCVD Risk Calculator, Gangar says that a risk of 7.5 to 10 percent is acceptable, but any number higher than that should also lead to the patient being prescribed a statin.

Increasing your HDL and improving your lifestyle
Medications like niacin, fenofibrate, and gemfibrozil have been used for years and have successfully increased HDL but have not been able to reproduce the mortality benefit that is shown by statins. Also, concurrent use of stations and fibrates increases risk of myalgias.

According to Dr. Gangar, there are four things that will actually increase a person’s HDL: exercise; quitting smoking; increasing fruits and nuts in the diet several times a week; and bringing your body mass index (BMI) within optimal range. These four actions will also provide overall health benefit.

“They don’t need to come to me for that – that’s what I want to encourage. We should all be doing these four things. Those are the things that are in our hands,” says Gangar. “This is a part of primary prevention.”

It is widely understood that being overweight puts you at a greater risk for heart disease. People who are overweight are not only more likely to have lower HDL and higher LDL levels, but also high blood pressure, pre-diabetes, or sleep apnea.

One may make the argument that you rely on visual appearance to know how much of a dietary change you need. But the truth is, many wait until it’s well past time to make that change before actually planning a course of action. At that point, the idea of weight loss is a daunting challenge.

At-risk patients also need to realize that bringing their BMI down isn’t about a number on a scale. Because BMI is calculated from an individual’s weight, which includes both muscle and fat, some individuals may have a high BMI but not a high percentage of body fat. People with a BMI of 30 or higher should concentrate on improving overall body composition.

“The bottom line is that every food turns to calories. It’s all about simple mathematics – 3500 calories translates into one pound, and if you’re able to cut down 3500 calories in your week’s course,  you will lose one pound per week,” says Gangar. “I’ve experimented with this on a few of my patients. One was in the pre-diabetic range, so I put her on calorie counting. Three months later, she had lost 20 pounds, and the pre-diabetes was gone. That’s how much protection losing weight gives you.”

Gangar tells her patients to think of their calories like cash: “If your cash is spent, you don’t have any credit.” In a world where there are so many cultural differences and different palates – not to mention every individual’s taste buds and preferences being different – it’s important that we don’t cut out the foods we want to indulge in, but that they fit inside of our calorie budget for the day and for the week.

“I will never tell a person ‘don’t eat that’. That’s why I’m not into any particular type of diet,” she stresses. “I’m more about lifestyle changes. You need to do things you can incorporate easily into your life – not something you will do for 10 days and then forget about.”

Does stress play a role?
Stress can have various effects on the body, and one of these is that it may increase cholesterol levels. This happens because when the body faces stress, certain physiological reactions take place, including changes in hormone levels and components in the blood. The thing about stress, however, is that it is usually responsible for a short-term raise – not a long-term raise – in cholesterol levels.

When a person is dealing with stress, their body automatically prepares their heart and other organs for a high-energy, fight-or-flight response. Their body will react in certain ways depending on whether that stressor is dealt with immediately or handled over a longer period of time. Regardless, when dealing with stress, the body releases the hormone cortisol – which causes the body to release glucose and fatty acids to the muscles and blood for use as energy.

These hormone levels will remain high until the person resolves the stressful situation – which is why the cholesterol threat could be either short or long-term.

“When steroids are released into your body, they independently reduce your HDL and increase your LDL. That’s how stress plays a role,” explains Dr. Gangar. “It’s hard to prove this in any studies because it’s such a subjective thing. It’s a very subjective assessment and it can only be translated into a research study. But if somebody has to explain the physiology, it’s probably related to cortisol and anabolic steroid release.”

A minimalistic approach
No research is foolproof, which is why physicians practice evidence-based medicine that is current. For high cholesterol and for all conditions affecting the human body, there are usually a set of guidelines to go by for what to change and how to do it.

“Read the current guidelines, but keep in mind that guidelines can change,” Gangar cautions. “We do advocate more for losing weight, diet and exercise. But if research says that you could live longer with a statin, would you take that, or would you just focus on your lifestyle? That’s what people should remember – that those two things are in their hands, and that you should focus on both your good cholesterol and bad cholesterol.”