If you have acid reflux, here’s what you can do about it 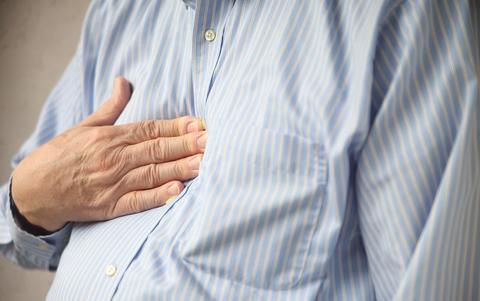 If you’ve ever felt a burning sensation in your throat or chest, then you – like one third of the population – have experienced heartburn. The key symptom is usually the taste of stomach acid in the back of your mouth, though other symptoms can include difficulty swallowing, chest pain (especially when lying down or eating), difficulty sleeping due to pressure in the chest, or a chronic cough.

Heartburn has become synonymous with the average American lifestyle, thanks to the way many of us structure our days with heavier, larger, or late night meals. Abuse of caffeinated beverages such as coffee or soda is typical among Americans, as is a more sedentary lifestyle that doesn’t allow excess calories to burn off. An estimated 160 million Americans are either obese or overweight, and over 34 million Americans are smokers.

All of these factors contribute to frequent heartburn – a condition called gastroesophageal reflux disease, or GERD.

“When someone has a heartburn on a more frequent basis, it causes damage or chemical burn to the food pipe. There’s a sphincter muscle between the esophagus and the stomach – like a one-way valve – that remains closed all of the time. When that valve becomes slightly lax, or weak, the result is that the acid in the stomach comes back up into the food pipe,” says Manoj Mittal, MD, gastroenterologist with Easton Hospital. “Our lifestyles, our eating patterns, our personal situations all increase the risk of those kinds of events.”

Why do we need stomach acid, anyway?

The stomach is full of hydrochloric acid (HCI), which aids in the digestion of food by breaking down proteins to the point that they can be passed to the small intestine. Most of us are probably only aware of our stomach acid when we experience heartburn or when we have a stomach virus or illness. What most of us are probably unaware of, however, is that stomach acid is our first line of defense against stomach illness.

“The way I look at it, nature gave us acid for a reason,” explains Dr. Mittal. “No matter how clean and careful we are, we all swallow some germs and bacteria. So when you swallow that bacteria, there’s a good chance the acid is going to take care of that.”

The first step in diagnosis usually includes a discussion about lifestyle modifications and the prescription of a proton pump inhibitor (PPI), medications that work by suppressing acid production in the stomach. Patients may recognize these by their brand names such as Prevacid or Nexium. It’s important, however, for patients not to rely on prescription drugs long-term. If their symptoms are not better after 12 weeks, their physician will recommend further testing.

“If someone comes back to me at 12 weeks and says they did the lifestyle modifications and the medication, and it didn’t work, the research shows that we should all take responsibility and we should not allow patients to take PPIs indefinitely,” says Dr. Mittal. “If you’re taking a PPI, you won’t have enough acid in the stomach. So that’s why with those medications, we’re becoming more cautious in using them. They’re very important medications, but they should not be used indiscriminately. If you say ‘I tried everything and I still don’t feel good,’ then I will decide to evaluate further.”

When patients come to the Heartburn Center at Easton Hospital, there are several procedures doctors can perform that will help them determine the extent of their heartburn. The first, an EGD, uses a flexible endoscope to examine the upper digestive tract. The second option, Bravo, is a tiny capsule attached to the wall of the esophagus that measures pH levels and reports them to a small device like a cell p hone. “Patients don’t feel the capsule at all, and it is passed naturally,” says Dr. Mittal. The third esophageal test, known as manometry, measures the strength of the swallow from the throat down to the stomach cavity.

Because GERD exists in four different stages, it is important for doctors to diagnose exactly what stage the patient is in so that they know what the best treatment option will be.

“We have established that the acid that comes back up into the esophagus causes chemical burn. Over time, that can transform into something called Barrett’s esophagus. Barrett’s means the lining of the esophagus changes over time from acid burn and acid damage,” cautions Dr. Mittal. “Barrett’s is of concern because it increases the risk of esophageal cancer. If that keeps happening, any chemical damage can alter the cells and increase the propensity of becoming cancer. Barrett’s does not cause cancer overnight, but over time, it will increase the risk.”

With an endoscopy or biopsies, doctors can make a diagnosis of Barrett’s, and their patients routinely follow up with them over the course of a few years to see if it has progressed or not. At the same time, the patient works with their physician to control the heartburn, which is the instigating factor. While many patients are diagnosed earlier than Stage 4 of GERD, if they present with severe heartburn, there are several treatment options or procedures available that can correct the condition and help them live symptom-free for the rest of their life.

In addition to endoscopies and continued surveillance of the damaged tissue, there are treatment options that include therapy to eliminate the Barrett’s tissue. One of those techniques is called Radio Frequency Ablation (RFA) therapy, which uses heat to cauterize the diseased tissue without damage to the rest of the esophagus. “It is a microwave kind of energy, and we take the scope and burn out the Barrett’s tissue. You don’t just do the treatment on anyone, however. There is selection criteria,” warns Dr. Mittal. To receive RFA, a patient would have to have advanced Barrett’s, as well as risk factors such as being overweight, smoking or drinking alcohol excessively.

Mittal says that about 95 percent of patients that receive RFA can go back to work or resume normal activity within a day or two, and must stick to a liquid diet for at least one day.

For some GERD sufferers, valve repair may be the only way to provide them the relief that medications do not. For a long time, an invasive procedure called Nissen fundoplication – where doctors make an incision and then wrap the top of the stomach around the esophagus to recreate a valve – was the only option. Now, a less invasive, non-surgical procedure called transoral incisionless fundoplication, or TIF® is being performed – with an extremely high success rate – by Amit Sohagia, MD, gastroenterologist with Easton Hospital.

The procedure, which takes about 45 minutes to one hour under general anesthesia, reconstructs the anti-reflux barrier between the stomach and esophagus by going through the mouth rather than through an abdominal incision.

“TIF®was approved by the FDA in 2007 and we started performing the procedure [at Easton Hospital] in 2016. Since then, we’ve treated around 130 patients with excellent results. There is no complication in a majority of the patients, and we’ve seen a 70 percent success in terms of patients who are still off their medications,” says Dr. Sohagia. “Even if they have to take medication, their reflux is much better controlled. After surgery, the medication requirement goes down. They have to take it as needed, not every day.”

Because TIF® involves grabbing the end of the esophagus and wrapping the top of the stomach about 270 degrees around it, there are fasteners involved that take about two weeks to fully heal, during which time patients must be on an entirely liquid to soft diet. Patients may feel mild, manageable pain for a day or two after the procedure, but not beyond that. After two weeks patients will notice right away that their heartburn symptoms are gone.

“It’s an instant fix, but it’s not a once-and-done where you are cured for the rest of your life,” cautions Dr. Sohagia. “We always tell patients to make sure that they don’t gain too much weight. It’s lifestyle control from that point on – eating small meals, not eating late, and following a diet.”

Dr. Sohagia now trains other physicians in the procedure and has helped to mine three-year data on TIF®outcomes for patients who have been under the care of Easton’s Heartburn Center. For patients who are frustrated with the possibility of continuing to take PPIs – particularly older people or cardiac or lung patients who aren’t candidates for open surgery – TIF®is a good alternative.

“The patients are very happy,” reports Dr. Sohagia. “And, it’s a very rewarding procedure for us.”